We are pleased to present an interview with Michael Harris. Having caught the eye with the Stradivarius Million Series Photo and a real delight with his photos on social media, Michael is looking for a way into racecourse photography…..

Can you tell us a little about yourself please?

I was born in Warwickshire, I am one of five children. My school years were spent at schools in Birmingham and Coventry. I moved to London in my twenties. I was married for 17 years but am divorced now sadly. I have one daughter, Amelia, who is 21 next week. I run my own window cleaning business in Central London.
My spare time is spent trying to improve my photography skills and spending time with my dogs. I live near Epping Forest so spend plenty of time out with the dogs which I really enjoy.

What was your first racing memory??

My first racing memory is sitting in the front room with my Grandad (George) as he was selecting his horses from the Daily Mirror and then watching the racing with him in the afternoon and cheering on his selections. If he won a few quid he used to take me down the shop to treat me to a comic and some sweets (usually a sherbet fountain). 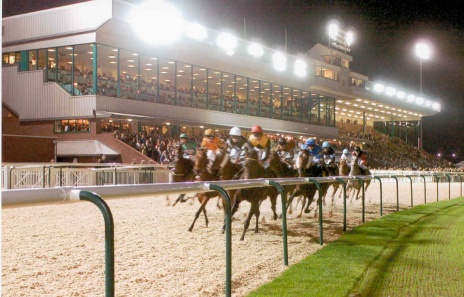 Can you remember the first meeting you went to?

The first meeting I think I went to was at Wolverhampton and I was helping a bookmaker friend of my Mum’s. I seem to remember Sabin Du Loir winning impressively that day. Up until this day I just used to watch racing on the telly.

When did you first get into photography?

I went to Newbury to see Frankel in the Lockinge. As he was being led in I rushed across to the walkway and took a photo of him on my little Sony Ericsson phone and tweeted it. It was retweeted quite a few times and I thought “This is fun.” For about the next year I was chasing around racecourses pointing my phone at horses and taking photos, until I soon decided to buy myself a little compact camera.
I progressed to an SLR a few years ago. It gives me a lot of enjoyment going racing, taking some photos of the day, and then coming home in the evening and seeing what I have. I just wish that I had discovered this pastime when I was younger.

What was the first meeting you took pictures at?

I can’t really remember that, to be honest, but I do remember that during Kingman’s 3 year old campaign I had progressed to an SLR and was trying to improve.

Your photos are very distinctive, why is that?

Since I have become more confident in my ability to capture racing moments and my understanding of the settings on the camera, I fully believe that the accuracy of those settings will determine the quality of the image. I don’t think that there is any right or wrong settings for any particular photo, but getting an optimum equilibrium that will take into account light and movement will dictate the quality of the photo.

Once you get that right, and it is not going to happen with every photo, then you are in a position to enhance that photo with post image editing. Good photos can be improved. Bad photos cannot be made good. It is my objective to consistently produce good photos, and the more I practice and the harder I work at doing that, the better I will become. I work extremely hard at improving, reading about and observing other photographers that are at a level above me.

You had a photo used for the million horse race, how did that come about?

this was the Frankie and Stradivarius photo after they won the Lonsdale Cup at York last season. I was accredited for this meeting and was able to take this shot soon after the race. I am usually restricted to the public enclosures to take my photos, so it was good to be able to have the chance to have some better access.

I was approached by a Weatherby’s employee who asked me if they could use the image for their promotion. I agreed and donated the fee for the image to Racing Welfare.

What is your favourite photo taken?

This would have to be the image that I took at the Burghley horse trials last September (attached). I had identified a fantastic bit of light this side of Lion Bridge. Through the bridge you could see Burghley House and some other official photographers, who I thought may detract from the image initially, but changed my mind at a later date. The fence is one of the later ones on the course, and I was after some splashback and also to see the above through the arch of the bridge.

Most competitors were taking a wider arc into the fence and were obscuring Burghley House, so I worked out that I needed someone that was in contention and would be after a fast time, and would take a quicker route to the fence opening up the space under the bridge. I went through the competitors and saw Harry Meade and Away Cruising were in contention and were on their way…….. and BINGO !!

It all went according to plan and it is an image that I am extremely proud of. It is a photo where the correct settings were crucial, to have the speed to capture the water movement but also enough light not to detract from the image. I just wish I had a better lens with me that day, that is the only negative. I give a lot of thought to my photos, far more than I think people would ever realise.
Which is/was the most photogenic horse?

Most horses are photogenic given that they are at ease with themselves. My favourite times to photograph horses are soon after a race at the testing areas, which is why I spend a lot of time there at the racecourses. Once a horse has relaxed and are thinking about getting back to their safety and security, they become very good photographic subjects. They will often look towards where they want to go, and I try and predict their behaviour to optimise photo opportunities.

I think that I have proved that I can do this successfully over the last few years, despite someone disagreeing on twitter the other day, and calling me Dr Doolittle. Thistlecrack is perhaps one horse that is very photogenic. He is a photographer’s dream for a headshot. Others that I remember being easy to photograph were Cotai Glory and Caravaggio.

What is the aim, in the long term, with your racing photography?

I think to be given a chance by the industry to show what I could do given better access. I would need either a publication or a racing body to take me on on a part time/weekend/big meeting basis. I just feel that I have so much to give in terms of enthusiasm and passion, and the ability to produce quality images, that I would be a real asset to someone.

We would like to thank Michael for his time and wish him all the best for the future. His photo’s deserve to grace more than just social media….